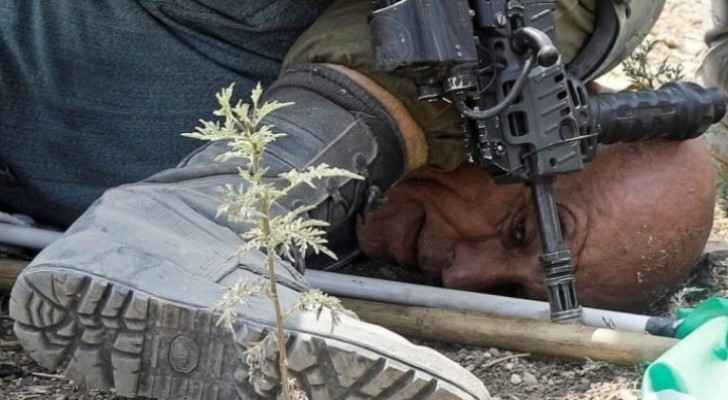 Israeli occupation soldiers attacked a Palestinian activist, Khairy Hanoun, while he was participating in peaceful standing protest in Tulkarem, according to Wafa news agency, on Tuesday.

A video circulated across social media platforms showing Israeli occupation soldiers assaulting the elderly citizen, who was unarmed and carrying a Palestinian flag.

Dozens of civilians were injured and suffocated after the Israeli occupation army attacked demonstrators protesting against land seizure to establish a settlement industrial zone, in the south and east areas of Tulkarem.

This settlement project involves lands that connects Tulkarem with Qalqilya and other governorates.

Photographers and journalists were also attacked at the scene, held at gunpoint and threatened not to film.

The governor of Tulkarem, Issam Abu Bakr, said they will continue their efforts to pursue legal and cultural action to fight the settlement project in Shufa, Jabara, Al-Ras and Kafriyat, in coordination with the relevant entities.

“The Palestinian people will remain steadfast on their land, firmly upholding their legitimate and inalienable rights, which will lead to the establishment of an independent Palestinian state, with Jerusalem as the capital,” he said.