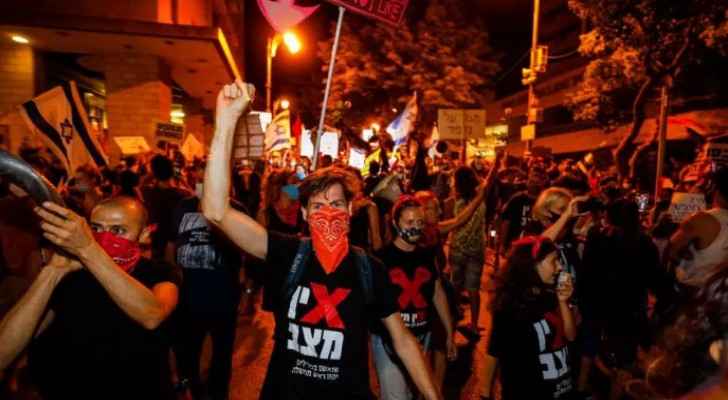 Thousands of settlers demonstrated on Saturday evening against Prime Minister, Benjamin Netanyahu, in separate parts of the country, demanding his resignation in light of the corruption accusations leveled against him and the rise in coronavirus infections.

The demonstrators gathered at dozens of intersections, roads and bridges, carrying banners accusing Netanyahu of "failure" and calling for his resignation, and a demonstration took place in front of his private residence in the northern coastal city of Caesarea - but the main gathering was in front of his official residence in Jerusalem.

The mask-clad protesters carried banners accusing Netanyahu of failing to combat COVID-19 and reduce economic repercussions of the crisis.

Hundreds of protestors in Tel Aviv demonstrated against the high unemployment rate and the government's failure to support self-employed workers after they lost their livelihoods due to the pandemic, according to Hebrew media.

Despite the praise the Israeli government received after its initial response to the coronavirus crisis, it faced criticism with the increase of positive cases after the ease of restrictions in late April.

Netanyahu has admitted rushing to reopen the economy and, as a result, the population of nine million has recorded more than 72,000 cases and 523 deaths since the beginning of the pandemic.

Netanyahu accused channels 12 and 13 of "publicizing the left-wing anarchist demonstrations" by providing wide coverage of the weeks of protests on Saturday.

Netanyahu also accused the media of ignoring the violent nature of the protests and talk about killing the prime minister and his family.

He retweeted the Likud party saying: "They are desperately trying to brainwash people with the aim of toppling a strong prime minister from the right."

Thousands of settlers protest against Netanyahu ....

Thousands of settlers protest against Netanyahu ....

Thousands of settlers protest against ....

Mass demonstrations against Netanyahu in occupied ....

Mass demonstrations against Netanyahu in ....

Mass demonstrations against Netanyahu in ....